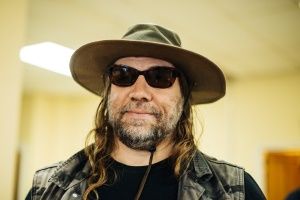 Harrisburg friends, we have received word that Catholic worker Naed Smith died on Friday, May 10, 2019 at his home on Market Street.

Everybody who was anybody in Allison Hill knew Naed, and a fair number of the nobodies, too. He had lived at the St. Martin de Porres Catholic Worker house on Market street as long as I can remember, and we connected over gardening and a belief that the poor have value. He lived among them in a way that few of us had courage to do, in the midst of the often chaotic cacophony of Market Street.

Naed struggled to balance his need for regenerative time in nature with his commitment to his neighbors on the Hill. For many years, he cultivated a beautiful and vibrant garden in a vacant lot behind Market St. I remember how he would sell bouquets at Mass to support the ministries of the Catholic Worker house, and how proud he was of the apple trees that were taking root.

His ubiquitous pick up truck was commonly seen around town, and I used to call him “The Robin Hood of Harrisburg” for his practice of redistributing the wealth of leftover produce he picked up from the farmers market. When we lived in Allison Hill, it wasn't uncommon to find a flat of strawberries or a case of cabbage on our front porch, and we knew that Naed had stopped by in his quiet and generous way.

Naed was a nonconformist in the truest sense of the word, and his sometimes outlandish wardrobe choices were a reminder to me that the masks and personas we carefully cultivate are pointless and silly. His commitment to justice included not just the display of prophetic messages on sheets fluttering in the breeze, but also an active presence at various peace protests, some of which landed him in prison for civil disobedience. He introduced me to the duplicity of democracy that’s taught at the former School of the Americas, and encouraged me to keep showing up for justice regardless of the results.

He wasn’t perfect, and his quirks and stubbornness could be annoying, but whenever I saw a picture of a white Jesus I thought of him. I had fallen out of touch with Naed since I moved out of the city--he wasn’t the sort to fritter away time on Facebook, and my attendance at city events took a backseat to other things--but I had heard that he was feeling low. I contributed his depression to the current state of affairs in Harrisburg and beyond, and to the exhausting and isolating work that had been his life for 20 years, but clearly it was more than that. I’m sorry, Naed, that I didn’t play a more active role in supporting you and the community you envisioned. You are loved, and you will be missed.

I think every conversation I had with Naed ended with him saying, "Peace," and so I say it to you now, brother, with hopes that you've found it.